Maturity models are tools that can benchmark current performance against best practise. It provides valuable information on the current status of operations and point out areas for improvement that could increase the operational effectiveness, not just from a processes perspective but also the involved people, the tools used and the interaction of different disciplines within an organisation.

P3M3 is a management maturity model looking across an organization at how it delivers its projects, programmes and portfolio. P3M3 is unique in that it considers the whole system and not just at the processes.

P3M3 provides three maturity models that can be used separately to focus on specific areas of the business, or more generally to help the organization assess the relationships between their portfolios, programmes and projects.

The three P3M3 maturity models are:

Each sub-model is further broken down into seven perspectives:

P3M3 allows an assessment of the process employed, the competencies of people, the tools deployed and the management information used to manage and deliver improvements. This allows organizations to determine their strengths and weaknesses in delivering change.

There are no interdependencies between the models so an assessment may be against one, two or all of the sub-models. It is possible for an organization to be better at programme management than it is at project management.

Through baselining an organization’s performance it is possible to identify areas where an organization can most effectively increase its project, programme and portfolio capability. Therefore the sort of benefits expected from using P3M3 to develop and implement an improvement plan would be:

Do you have a recurring problem that keeps on coming back despite repeated actions to address it? This might be an indication that you are treating the symptoms of the problem and not the actual problem itself – you need to determine the root cause of the problem – you must conduct a root cause analysis.

Root cause analysis (RCA) is a systematic process for identifying “root causes” of problems and the appropriate response that effectively deals with it. RCA is based on the basic idea that effective management requires more than merely “putting out fires” through quick fixes for problems that develop, but finding a way to prevent them from occurring again or in the first place. A root cause analysis is a process used to identify the primary source of a problem.

An effective method to get to the bottom of a problem is to use the “5 Whys” that was initially developed as part of TPS (Toyota Production System) that gave birth to what we know today as Lean Six Sigma – discussed in more detail in the article on “Lean Six Sigma – Organisational Development and Change”.

The primary goal of the technique is to determine the root cause (source) of a defect or problem by repeating the question “Why?”, five times. Each answer forms the basis of the next question.

Why five time? This derives from an anecdotal observation on the number of iterations needed to resolve the problem.

How to conduct the 5 Why technique:

In business, only one cause for a problem is not the usual case. Using the 5 Whys in conjunction with the Fishbone Diagram (Ishikawa), that helps the exploration process to cover all potential inputs and hence potential causes of problems or defects.

The 5 Whys method can be used to uncover multiple root causes by repeating the process asking a different sequence of questions each time.

Performance is simply the action taken or process followed in doing a task or function.

Performance improvement – the continuous driver to be better, to grow, to achieve great things!

Directly related to business performance is the ability to change the business processes for greater effectiveness and efficiency increasing productivity while terms like specialisation, standardisation comes to mind followed by measurement, data analysis, statistical analysis, root cause analysis and finally process control and quality control and the overriding metric – customer satisfaction.

Remember the saying by Peter Drucker: “What gets measured, gets improved”…

Effective: Success in delivering a desired or intended result.

Efficient: Achieving maximum productivity through optimal use of resources with minimum waste or expense.

Depending on your business and your situation you must select or develop key performance indicators (KPIs) to calculate the effectiveness and efficiency of your activities – for business this is usually calculated in monetary terms. Once you understand your current performance you can set KPI targets and work on improvement initiatives.

I found this flow on Pinterest that gives a great overview of the processes involved in enhancing effectiveness and efficiency to increase business performance summarised in 5 habits of the mind:

Linking appropriate KPIs to this flow can measure progress and deliver improving results. 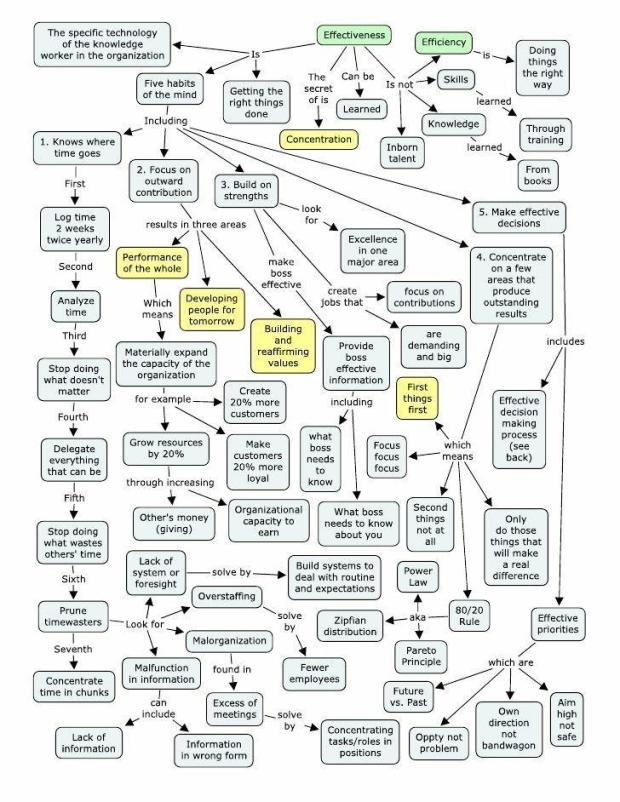 Performance (Effectiveness and Efficiency) can be influenced by various different factors – illustrated in the diagram below.

In using this diagram, a critical path (Shown in red above) can be drawn to improve performance in a specific area i.e. staff performance.

This methodology can be adapted and used for performance improvement in any area of the business value chain.

Let’s Talk – renierbotha Ltd specialises in the performance improvement of business and IT operations. Are you looking to achieve your goals faster? Create better business value? Build strategies to improve growth? We can help – make contact!

How exactly can the five elements of emotional intelligence EI be combined to result in great leadership?

The first step is to remember this: You’re a leader, not a super hero. It’s OK to be human. In fact, it’s critical to maintain all of the qualities of a human, particularly the ones that enable other people to relate to you and like you. Here are six ways to do just that.
#EI #Lead #People #Leadership

We all have the ability to influence other people, and are, thus, all leaders in some way. And while leading by example is a known recipe for success, how to combine the actual ingredients for that recipe is often elusive. A huge part of what makes an effective leader is emotional intelligence, the capacity to be aware of, control and express one’s emotions, as well as handle interpersonal relationships judiciously and empathetically. Emotional intelligence, also known as EQ or EI, is a term popularized by Daniel Goleman, who defined these five interconnected components of emotional intelligence:
1. Self-awareness.
2. Self-regulation.
3. Motivation.
4. Empathy.
5. Social skills.

So there’s a list of ingredients, but how exactly can those five elements be combined to result in great leadership? The first step is to remember this: You’re a leader, not a super hero. It’s OK to be human. In fact, it’s critical to maintain all of the qualities of a human, particularly the ones that enable other people to relate to you and like you. Here are six ways to do just that.

Vulnerability (self-awareness)
As counterintuitive as it may seem, great leadership relies on vulnerability. Humans aren’t perfect. We all make mistakes. We all fear something. A leader who can acknowledge and address his or her vulnerabilities is respected and emulated because vulnerability builds connection and trust.

Storytelling (self-awareness, empathy and social skills)
Ken Kesey, professional storyteller and author of One Flew Over the Cuckoo’s Nest (among many other titles) once said, “You don’t lead by pointing and telling people some place to go. You lead by going to that place and making a case.” This is what stories can do. Instead of telling someone what to do or how to do it, share anecdotes from your life with takeaways that exemplify your values, how you came to appreciate those values and what you like to see in other people. Sharing personal stories (and listening to other people’s stories) also exposes a vulnerability that, ultimately, builds trust. If you’re not a natural storyteller, find a storytelling workshop or encourage your organization to host a storytelling lab. You’ll discover that we, as humans, have been telling stories for thousands of years and are programmed to do it. (In fact, the Latin word “historia,” which is where the word “history” derives from, has the word “story” right in it—because narratives—illustrated, oral and written—are how humans have always shared information.)

De-Powering (self-regulation)
Neuroscientists have studied why power corrupts and found that it impairs “mirroring,” a neural process that is a cornerstone of empathy. While it’s difficult to prevent power from having this affect on your brain, it is possible to remove yourself from power occasionally. To maintain a capacity for empathy, it’s important to not always feel powerful by participating in mundane obligations (e.g. buy milk, pay bills), recalling humbling episodes from your past, and interacting and relating (genuinely) with ordinary, less influential people.

Psychological Safety (motivation and empathy)
Emotional intelligence requires inner motivation, and leadership requires the ability to inspire and energize other people. But if you want an innovative team that enjoys coming to work and comes up with fresh ideas, approach them with compassion in order to nurture an environment where people feel comfortable expressing opposing opinions and taking risks. A supportive environment allows people to experiment with ideas without fear of ridicule or recrimination. Also toward that end, don’t be stingy with praise—but do be sincere.

Knowing People (empathy)
Isolation has a huge price. If your team doesn’t know you, understand you and like you, then the reverse is also true: You don’t know, understand or like the individuals on your team. And that means that you can’t help each person play to his or her strengths. Only by getting to know individuals will you be able to recognize their limitations and special abilities and be able to adapt and find the best role for everyone on the team.

Diffusing Conflict (social skills and empathy)
People push buttons. People disagree. And a good leader needs to know how to flip the script before arguments escalate and damage work relationships. One technique when someone flies off the handle is to simply stop the conversation and ask with genuine concern, “Are you OK?” A conflict-diffusing response like this, which interrupts the tempo of a heated conversation and subdues an amygdala hijack, is often effective.