Robotic process automation (RPA) can be a fast, low-risk starting point for automating repettitive processes that depend on legacy systems. Software bots can pull data from these manually operated systems (most of the time without an API) into digital processes, ensuring faster and more efficient and accurate (less user error) outcomes.

In traditional workflow automation tools, a system developer produces a list of actions/steps to automate a task and define the interface to the back-end system using either internal application programming interfaces (APIs) or dedicated scripting language. RPA systems, in contrast, compile the action list by watching the user perform that task in the application’s graphical user interface (GUI), and then perform the automation by repeating those tasks directly in the GUI, as if it is manually operated.

RPA tools have strong technical similarities to graphical user interface testing tools. Automated testing tools also automate interactions with the GUI by repeating a set of actions performed by a user. RPA tools differ from such systems in that they allow data to be handled in and between multiple applications, for instance, receiving email containing an invoice, extracting the data, and then typing that into a financial accounting system.

Used the right way, though, RPA can be a useful tool in your digital transformation toolkit. Instead of wasting time on repetitive tasks, your people are freed up to focus on customers or subject expertise bringing product & services to market quicker and provide customer outcomes quickly – all adds up to real tangible business results.

Now, let’s be honest about what RPA doesn’t do – It does not transform your organisation by itself, and it’s not a fix for enterprise-wide broken processes and systems. For that, you’ll need digital process automation (DPA).

The RPA market is rapidly growing as incumbent vendors jockey for market position and evolve their offerings. In the second year of this Magic Quadrant, the bar has been raised for market viability, relevance, growth, revenue and how vendors set the vision for their RPA offerings in a fluid market.

Choosing the right RPA tool for your business is vital. The 16 vendors that made it into the 2020 Gartner report is marked in the appropriate quadrant below.

To stay in the race, you have to start fast. Robotic process automation (RPA) is non-invasive and lightning fast. You see value and make an immediate impact.

Part of the journey is not just making a good start with RPA implementations but to put the needed governance around this technology enabler. Make sure you can maintain the automated processes to quickly adapt to changes, integrate with new applications, align with continuously changing business processes while making sure that you can control the change and clearly communicate it to all needed audiences.

To ensure that you continuously monitor the RPA performance you must be able to measure success. Data gathered throughout the RPA journey and then converted through analytics into meaningful management information (MI). MI that enables quick and effective decisions – that’s how you finish the journey.

Some end-to-end RPA tools cover most of the above change management and business governance aspects – keep that in mind when selecting the right tool for your organisation.

So, do you want to stay ahead of your competition? Start by giving your employees robots that help them throughout the day.

Give your employees a robot

Imagine if, especially in the competitive and demanding times we live today, you could give back a few minutes of time of every employee’s day. You can if you free them from wrangling across systems and process siloes for information. How? Software robots that automate the desktop tasks that frustrate your people and slow them down. These bots collaborate with your employees to bridge systems and process siloes. They do work like tabbing, searching, and copying and pasting – so your people can focus on your customers. 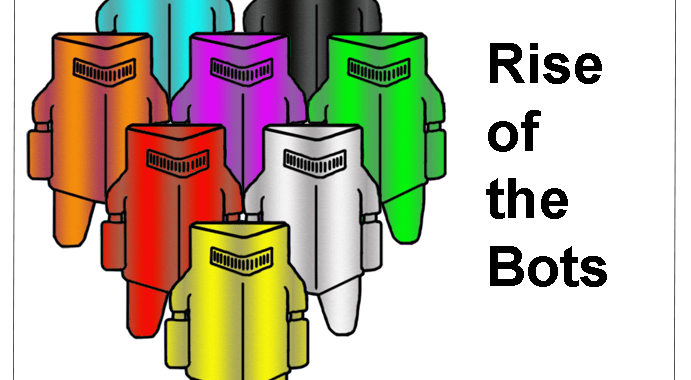 The dawn of the rising bots is upon us. If you do not know what a Bot is, it’s the abbreviated form for the word Robot, and it is a term that is now commonly used to describe automated software programs that are capable of performing tasks on computers that traditionally were reserved for human beings. Bots are software and Robots are Hardware, all Robots need Bots to power their reasoning or “brain” so to speak. Today the Golden Goose is to build Artificial Intelligence (commonly known as AI) directly into the Bots, and the goal is, for these Bots to be able to learn on their own, either from being trained, or from their own experience of making mistakes. There is after all no evidence to suggest that the human mind is anything more than a machine, and therefore no reason for us to believe that we can’t build similar intelligent machines incorporating AI.

These days Bots are everywhere, you may not realise it so here are a few examples that come to mind:

Trading Bots: Trading Bots have existed for many years, at least 20 years if not more and are capable of watching financial markets that trade in anything from currency to company shares. Not only do they watch these markets, but they can perform trades just like any other Human Trader. What is more, is that they can reason out, and execute a trade in milliseconds, leaving a Human Trader in the dust.

Harvesting Bots were originally created by computer gamers who were tired of performing repetitive tasks in the games they played. Instead of sitting at their computer or consoles for hours killing foe for resources such as mana or gold, one could simply load up a Bot to do this tedious part of gameplay for you. While you slept, the Bot was “harvesting” game resources for you, and in the morning your mana and gold reserves would be nicely topped up and ready for you to spend in game on more fun stuff, like buying upgraded weapons or defences!

Without Harvesting Bots and their widespread proliferation in the gaming community we are all very unlikely to have ever heard of Crypto Currencies, you see it can be argued that these would never have been invented in the first place. Crypto Currencies and Block Chain technologies rely in part on the foundations set by the computer gaming Harvesting Bots. The Harvesting Bot concept was needed by the Crypto Currency Pioneers who used it to solve their problem of mimicking the mining of gold in the real world. They evolved the Harvesting Bot into Mining Bots which are capable of mining for crypto coins from the electronic Block Chain(s). You may have heard of people mining for Bitcoins and other Crypto coins, using mining Rigs and the Bots; the Rigs being the powerful computer hardware they need to run the Mining Bots.

What about Chat Bots? have you ever heard of these? These Bots replace the function of humans in customer service chat rooms online. There are two kinds of Chat Bots, the really simple ones, and the NLP (Neuro Linguistic Programming) ones which are capable of processing Natural Language.

Simple Chat Bots follow a question, answer, yes/no kind of flow. These Chatbots offer you a choice of actions or questions that you can click on, in order to give you a preprogramed answer or to take you through a preprogramed flow with preprogramed answers. You may have encountered these online, but if not, you will have certainly encountered this concept in Telephone Automation Systems that large companies use as part of their customer service functions.

NLP Chat Bots are able to take your communication in natural language (English, French etc..), making intelligent reasoning as to what you are saying or asking, and then formulating responses again in natural language that when done well may seem like you are chatting with another human online. This type of Chatbot displays what we call artificial intelligence and should be able to learn new responses or behaviours based on training and or experience of making mistakes and learning from these. At KAMOHA TECH, we develop industry agnostic NLP Bots on our KAMOHA Bot Engine incorporating AI and Neural Network coding techniques. Our industry agnostic Bot engine is used to deploy into almost any sector. Just as one could deploy a human into almost any job sector (with the right training and experience) so too we can do this with our industry agnostic artificially intelligent KAMOHA Bots.

Siri, Cortana and Alexa are all Bots which are integrated to many more systems across the internet, giving them seemingly endless access to resources in order to provide answers to our more trivial human questions, like “what’s the weather like in LA?”. These Bots are capable of responding not only to text NLP but also to voice natural language inputs.

Future Bots are currently being developed, Driverless vehicles: powered by Bots, any Robot (taking human or animal form) that you may see in the media or online in YouTube videos are and will be powered by their “AI brain” or Bot so to speak. Fridges that automatically place your online grocery shopping order – powered by Bots, buildings that maintain themselves: powered by Bots. Bot Doctors that can diagnose patients, Lawyer Bots, Banker Bots, Bots that can-do technical design, image recognition, Bots that can run your company? … Bots Bots Bots!

People have embraced new Technology for the last 100 years, almost without question, just as they did for most of Medical Science. Similar to certain branches of Medical Science, Technology has its bad boys though, that stray deeply into the Theological, Social, Moral and even Legal territories. Where IVF was 40-50 years ago, so too are our Artificially Intelligent Bots: pushing the boundaries, of normalities and our moral beliefs. Will Bots replace our jobs? What will become of humans? Are we making Robots in our own image? Are we the new Gods? Will Robots be our slaves? Will they break free and murder us all? A myriad of open ended questions and like a can of worms or pandora’s box, the lid was lifted decades ago. Just as sure as we developed world economies and currency in a hodgepodge of muddling through the millennia we are set to do the same with Bots; we will get there in the end.

It’s not beyond my imagination to say that if Bots replace human workers in substantial volume, then legislation will be put in place to tax these Bots as part of company corporation tax, and to protect human workers it is likely that these taxes will be higher than that of humans. If a bot does the work of 50 people? How do you tax that? Interesting times, interesting questions. My one recommendation to any one reading this, is do not fear change, do not fear the unknown, and have faith in the Human ability to make things work.

Love them or hate them Bots are on the rise, they will only get smarter and their usages will be as diverse as our own human capabilities. Brave new world.

Click on the image below to see our bots: